END_OF_DOCUMENT_TOKEN_TO_BE_REPLACED

I was welcomed into the Art Gallery of Nova Scotia with over the top friendly and helpful Maritime graciousness. Maritimers bring the Canadian “nice” to a whole new level.   I gravitated first to what I was most anticipating, the Maud Lewis Gallery.  To my delight her entire house with all of the surfaces, including a good part of the stove, is covered with what is now iconic Maritime folk art.  Learning about the person and her challenges with childhood arthritis brought a new level of understanding to art for the pure delight of creation and celebration of everyday surroundings.  Her art didn’t emerge from limitations on her life due to her physical challenges but her ability to delight in the life she was living.

The gallery tour started at 7:00 pm but many regulars had decided to wander through the gallery on their own.   The docent was a gentlemen named Ian (I think) and had a wealth of background knowledge and had met many of the artists showing in the gallery.  The tour started as a consideration of the show by the well known Nova Scotia artist, John Greer and his show “Retroactive”.   In the very best of teaching strategies, Ian provided not only the background, but shared stories about the artist, the installation of the show and posed questions about the works.  I learned that  John Greer also has a studio in Italy and gets his marble from the same quarry as Michelangelo.  Imagine there still being marble left!  Ian was able to encourage close consideration of the art by evoking thinking with “I wonder” and prefacing questions with “There is no right answer but…”.   What began as a standard gallery tour emerged into one of the most amazing discussions of art.

The “Terroir:  A Nova Scotia Retrospective”collection drew me in immediately with the wine references.   The permanent collection of Nova Scotia is explored in relation to the soil, topography and climate.   Early paintings of the Maritimes and early contact with the Mi’kmaq nation were done in Europe by artists who were using early maps and records of battles by early explorers and traders.  They were followed by the work of Arthur Lismer, Alex Colville, Christopher Pratt, Mary Pratt and so many other interesting and reknown Canadian artists.  A great addition was the Contemporary First Nations Arts from artists such as Ahmoo Angecomb, Carl Beam, Edward Ned bear, David Brooks, Norval Morrisseau, Daphne Odjig, Jane Ash Poitras and Alan Syliboy.   Ian ended off the tour by asking if I wanted to see his favourite piece in the gallery.  It was both an honour and a privilege to be asked.   To my amazement 1 hour and 40 minutes had passed in what felt like a mini-course on Canadian art.  Hands down the best gallery tour that I have ever taken.  If I had been more on the ball, I would have taken down his complete name so I could send a personal thank you card.

Ian underscored the importance of engaging in the stories of the art that is created and selected for showings.  My daughter recently moved into an old house with a friend and promptly started painting the wall of her little “studio” off her bedroom.  Like Maud Lewis, it is an exploration of her own creative impulses and making sense of her world.  This is what I want for the students under our care.  How can we provide the opportunities and experiences so that they have the basic skill and confidence to explore their ideas and express themselves artistically?  I have “DuckDuckGo’ed” and will be looking at ways to expose our Tecumseh students to some of the opportunities in Vancouver to expand their artistic horizons in Vancouver.   I have always encouraged parents to attend Super Sundays at the Vancouver Art Gallery but this year, we will be heading to the Gallery this fall for a start where I can start sharing some of my stories.

At my school in the South Slope of Vancouver, we have just raised just over $11,000 to put towards replacing our deteriorating wooden playground structure. The Parent Advisory Committee now has just over $30,000 in the designated savings account.   Students and adults alike are now starting to dream about the possibilities that could come alive in the new playground.

Clyde Hertzman and Kim Schonert Reichl have had a profound impact in British Columbia.  Hertzman clearly articulated that “[o]ur childhood experiences influence health, well-being, learning and behaviour for the rest of our lives”.  Then he went about facilitating the use of  The Early Learning Development Instrument to look at populations of kindergarten students and identify vulnerabilities of specific regions.  Kim Schonert Reichl’s focus on social and emotional learning turned our attention on fostering empathy, altruism and resiliency, as well as implementing the Middle Years Development Instrument (MDI) to allow for consideration of longitudinal data.  They have made us more aware in British Columbia of the need to create contexts for students to develop social, emotional and academic competencies.  Play spaces in community parks and schools lend themselves to allowing children to stretch their limits physically and learn to play imaginatively with peers.  Wouldn’t it be great it they could directly incorporate experimenting and exploring language with family, friends and caregivers in free play public spaces?

Vi Hughes is an educator, children’s writer and early literacy advocate.  Frances Warner is a community planner and educator.  These women have been posing the crucial question… WHY ARE THERE SO FEW WORDS, NUMBERS, OR RHYMES IN PLAY SPACES?

Their brainchild, LITE – Literacy in the Environment, is based on the premise that placing foundational reading experiences in play spaces will support the development of literacy skills.  Hughes and Warner emphasize the importance of encouraging collaborative talk between preschoolers and parents / primary caregivers to spark curiosity and conversations about letters and their relationship to words.  Imagine the possibilities if letters and words could be incorporated into school play spaces and classroom lessons could be developed and consolidated on the playground with vulnerable learners.  Check out the LITE facebook page to see some of the possibilities that playground companies are beginning to provide.  Hughes and Warner reports that several strong examples of incorporating literacy elements into playground design are emerging.   John Lawson Park in West Vancouver has incorporated literacy elements and won a regional prize for their design.  Ryall Spray Park in New Westminster has also incorporated literacy elements.  Several spaces in Vernon are incorporating LITE and Warner is participating in the City of Vernon’s Master Plan for Parks.  As the demand builds, they hope that playground manufacturers such as Landscape Structures, Kompan, Blue Imp and others will continue to respond to requests from clients for play spaces that support literacy through play.

On the LITE facebook link, there is a great picture of a rock with a blueberry label adhered to it and placed in the school garden.

In my previous school, we had a wonderful garden.  I had students research the plants and animals in the garden and we secured a small neighbourhood grant to create signs that could be part of student or self directed garden tours.  It soon became quite apparent that the placement of the signs had to be carefully considered to avoid becoming hazards as students moved through the garden.  Rocks!  If only we had thought of rocks!

If you have any ideas, suggestions or stories about possible ways to incorporate literacy into the environment, please leave comments. 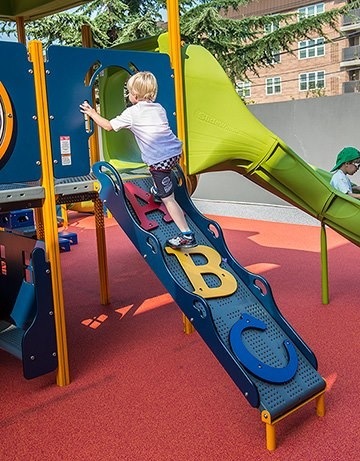